Bootleg is a project showcasing Appalachian-inspired music based on folk music or elements of folk music. These four selections use a variety of instrumentation and compositional techniques to create classical music with a distinctly American sound. Each composition is unique, approaching the concept in a different style and a distinctive context. The tuneful collection focuses on melodies, rhythms, and harmonies that are easily approachable for the listener.

Listen about the Album: Interview with Ethan Jenkins and Russ Zokaites on WMKY Morehead Public Radio

Praise for the Album

"American bass trombonist Russ Zokaites specializes in new music, and he has put together a varied program for this disc, titled Bootleg. Latchn Duets from 2018 was commissioned by Zokaites from Brad Edwards. These are three duets for tenor and bass trombone based on Appalachian folk music. The music is filled with beauty, virtuosic demands, and humor. Particularly the third, a setting of “Sweet Betsy from Pike,” is guaranteed to bring a smile, especially in the witty performance here by Zokaites and Timothy Anderson.
Martin Hebel’s Serenity, as its title would lead you to believe, is an introspective trio in one movement for bass trombone, cello, and piano. It is also based on Appalachian tunes, exploring the lyrical possibilities of the bass trombone. Zokaites plays with a beautiful cantabile, and Hebel finds the right approach to balance the three instruments.

Kenneth Fuchs’s Bass Trombone Concerto, at 13:31, is the major work on the program. Scored for bass trombone and wind band, its predominant mood is lyrical. The concerto is in one continuous movement divided into four clear sections. Fuchs adroitly balances the lyric and the virtuosic, writing in a tonal style. The music demonstrates Fuchs’s melodic gift as well as a fine ear for color. Aided by excellent accompaniment from the U.S. Army Band under Andrew Esch, and unusual as a concerto for bass trombone might seem, the piece is surprisingly buoyant and beautiful.

The final work on the program, William Timmons’s A Strange Wayfarer for bass trombone and looping station (i.e., a tape loop), is based on the famous Appalachian folk song “I’m Just a Poor Wayfaring Stranger.” Timmons has taken his inspiration from the mood of lyrics, depicting life’s sad journey, with hope for the afterlife where home awaits. The melody is fragmented, filtered through many variations and a mesmerizing interaction between Zokaites and the tape loop, where he also plays in a texture of electronic and acoustic sounds. Overall, the piece has a hypnotic beauty about it.

As a performer, Zokaites has all the skill necessary to bring off a program like this: variety of color, precision, lyricism, and a musical presence." ~Henry Fogel Fanfare Magazine

"Russ Zokaites shines in this diverse and colorful album made during one of the most trying times in modern history. From chamber music to fully orchestrated concertos, he finds a unique and warm voice that takes you on a musical journey into many different landscapes. I particularly enjoyed the lush interplay of cello, piano, and bass trombone in "Serenity" by Martin Hebel, and the funky looped beats and harmonies of  "A Strange Wayfarer" by William Timmons." ~ Sasha Romero Principal Trombonist Metropolitan Opera Orchestra

"Russ Zokaites has assembled a great collection of new pieces that he has had a large hand in getting composed. Brad Edwards's duets - composed for Zokaites - are excellent concert duets that he and CCM Trombone Professor Tim Anderson handle with excellent style and smooth coordination. In Martin Hebel's Serenity, Zokaites uses his opportunity to sing a beautiful soulful Appalachian tune in a chamber setting with piano and cello. The cornerstone of this recording is his commission of Grammy winner Kenneth Fuchs in a beautiful concerto for bass trombone, performed with the US Army Band. Zokaites's playing is light and lyrical, ranging easily from flying high phrases to majestic statements in the low pedal range. Fellow South Carolinian and CCM grad, Will Timmons wrote a very compelling piece for bass trombone and loop station that slowly builds up in momentum. Zokaites plays with varying styles and colors to create a brilliant sonic texture in an exciting conclusion. This is a worthy recording that will introduce you to an excellent bass trombonist performing new music inspired by his Appalachian home." ~ George Curran Bass Trombone New York Philharmonic 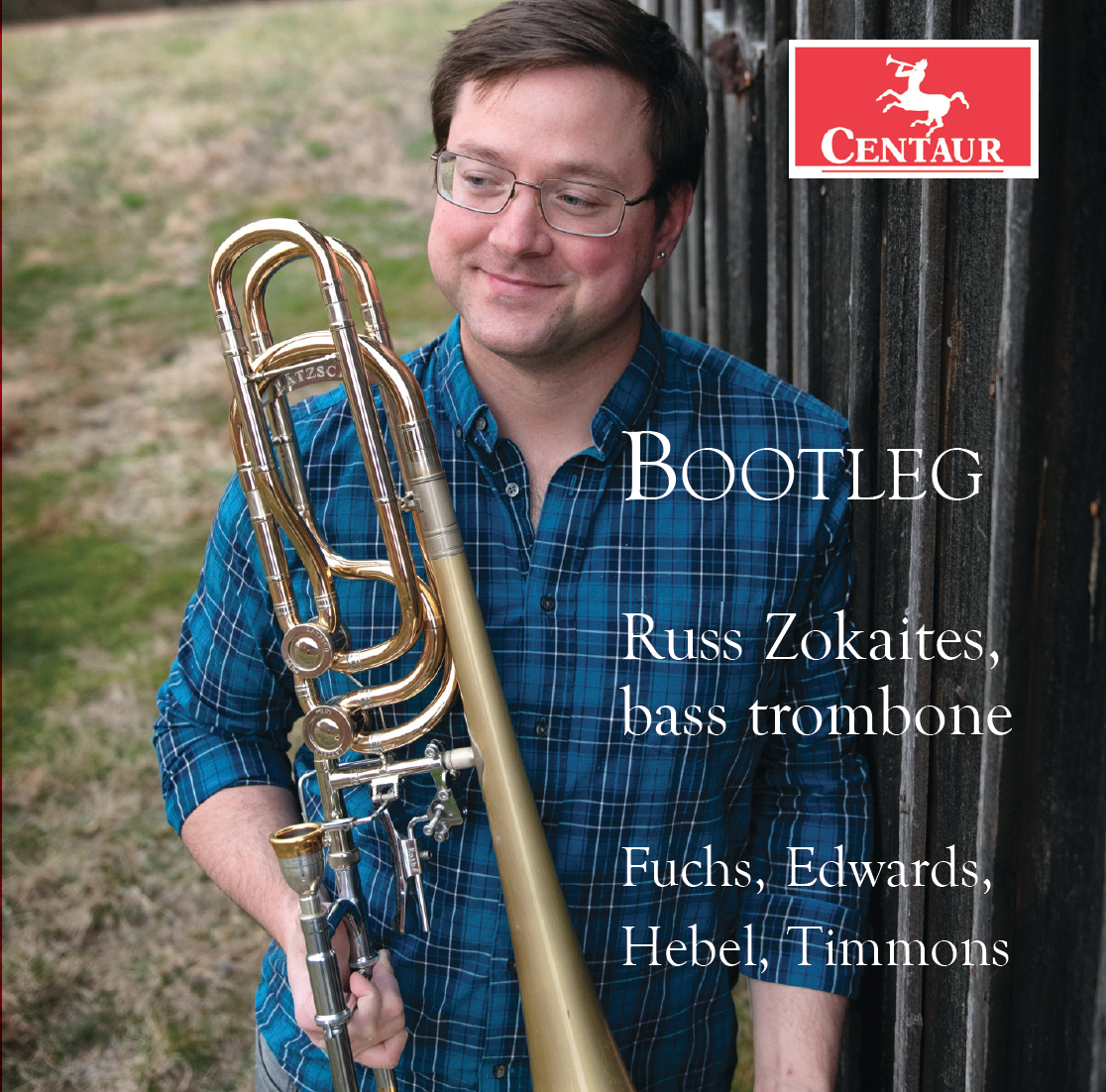 Bootleg was the #1 New Release on Amazon the week of Nov. 5 2021. Please purchase the album here.

Check out this article on Morehead State University's Trail Blazer Newspaper. Or this one on Last Row Music. 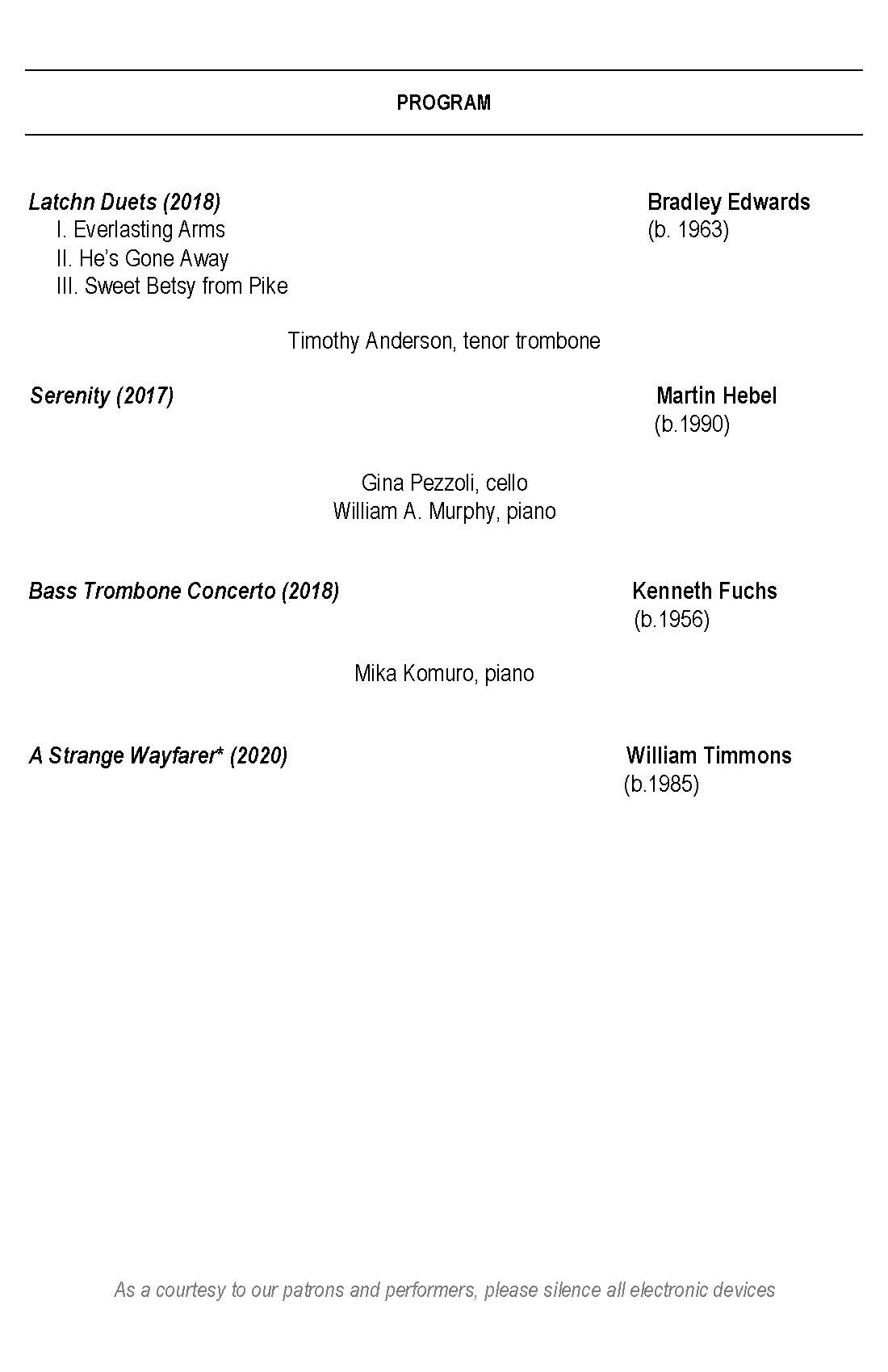 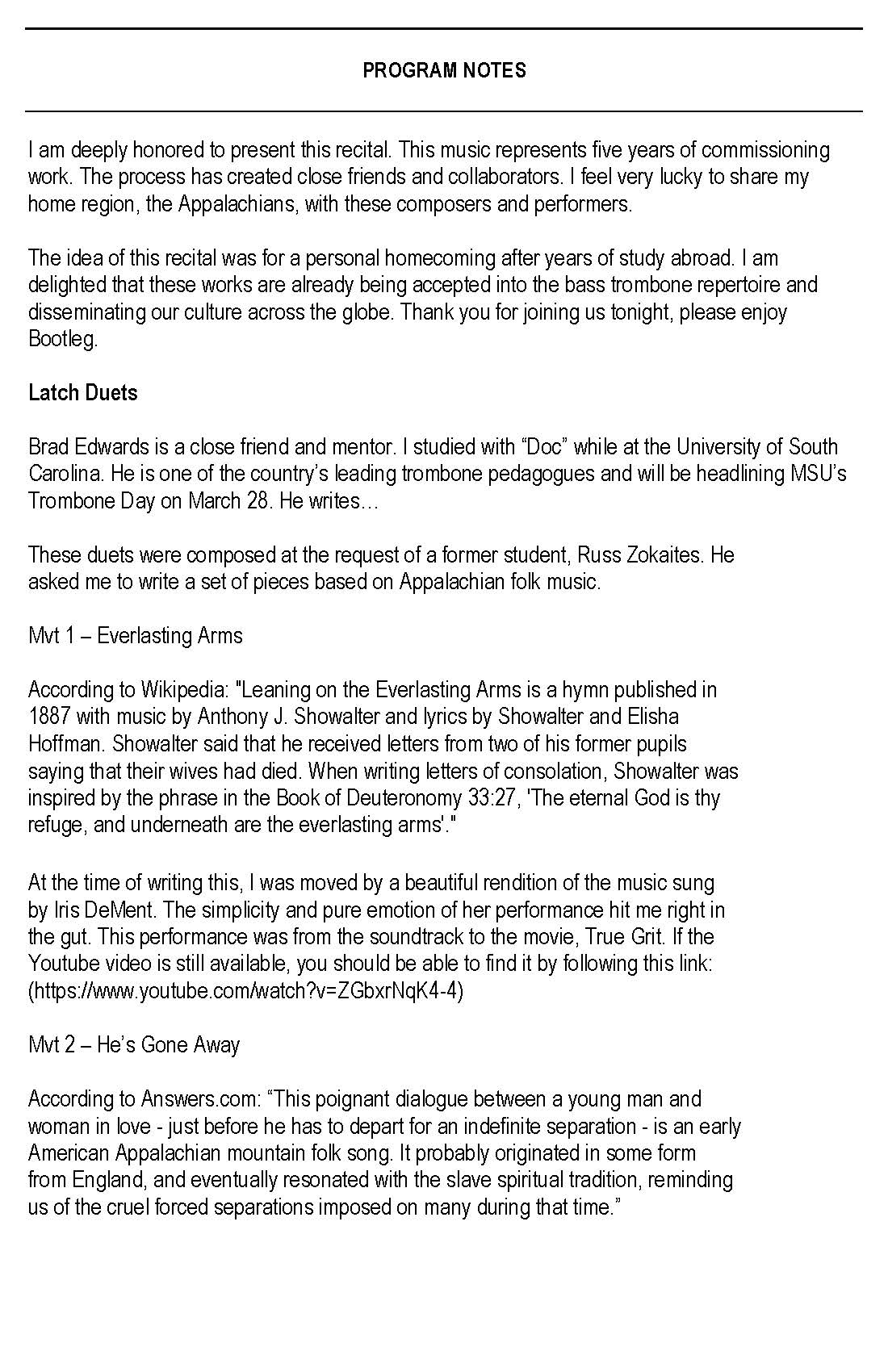 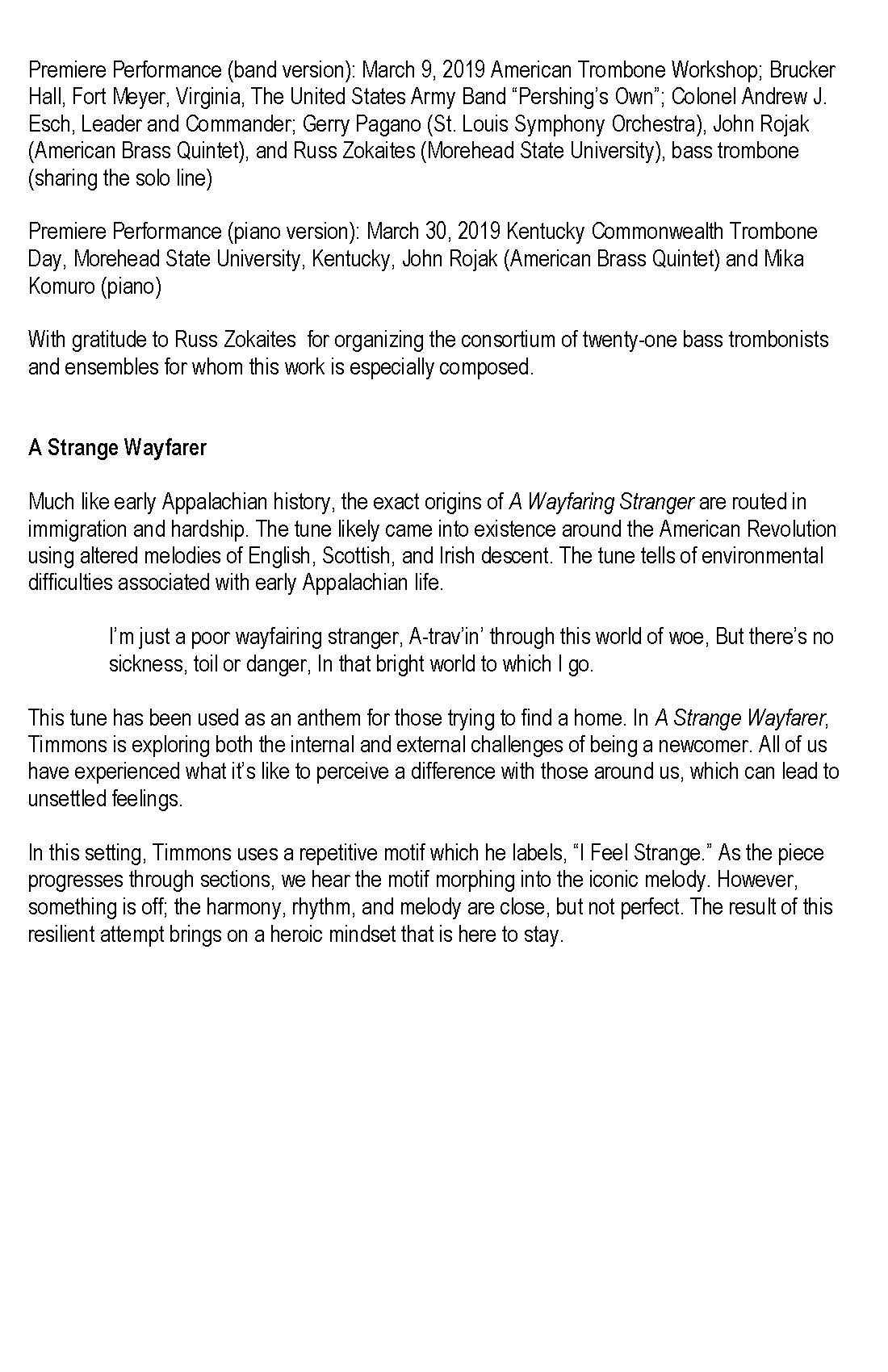 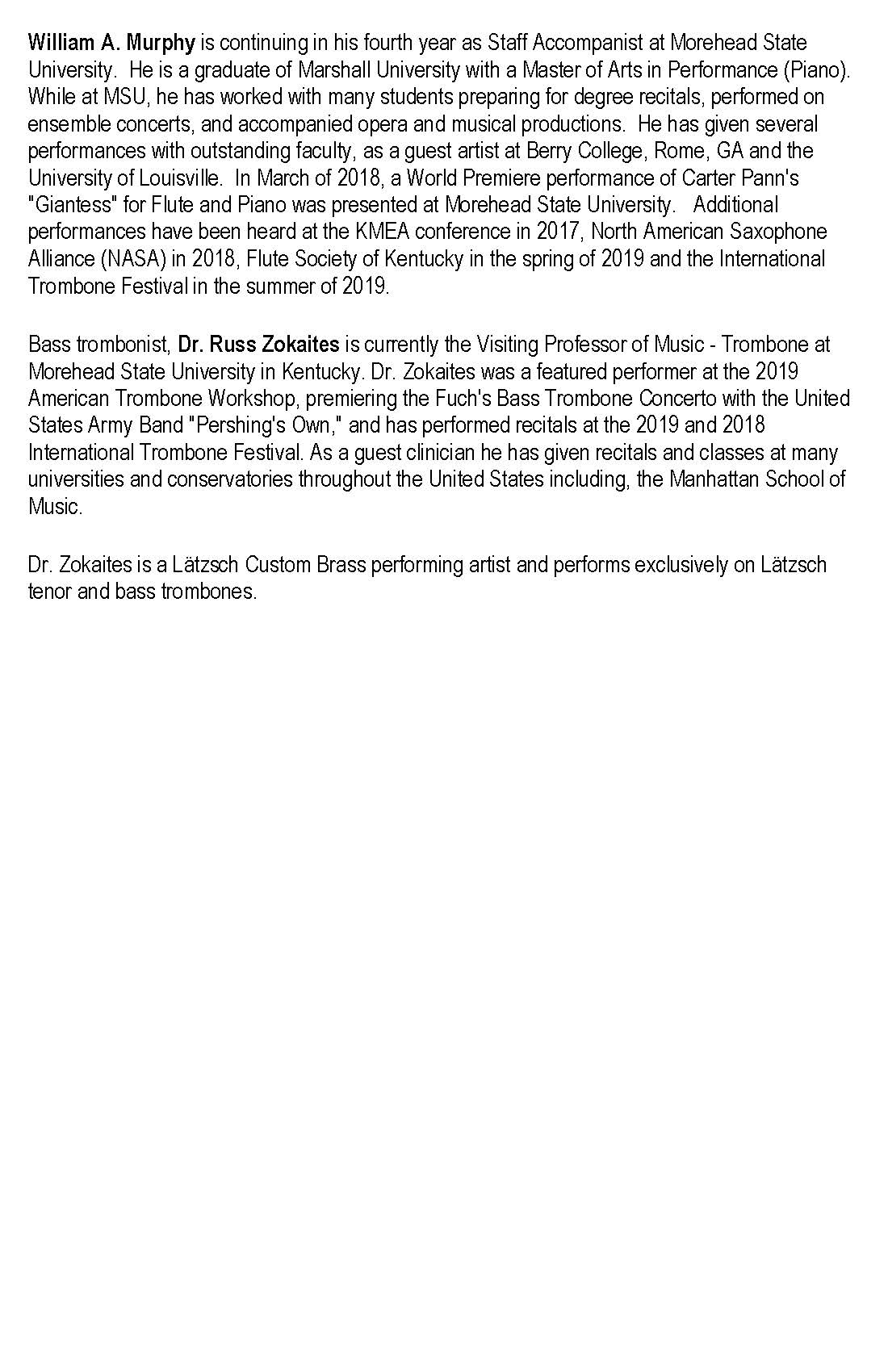 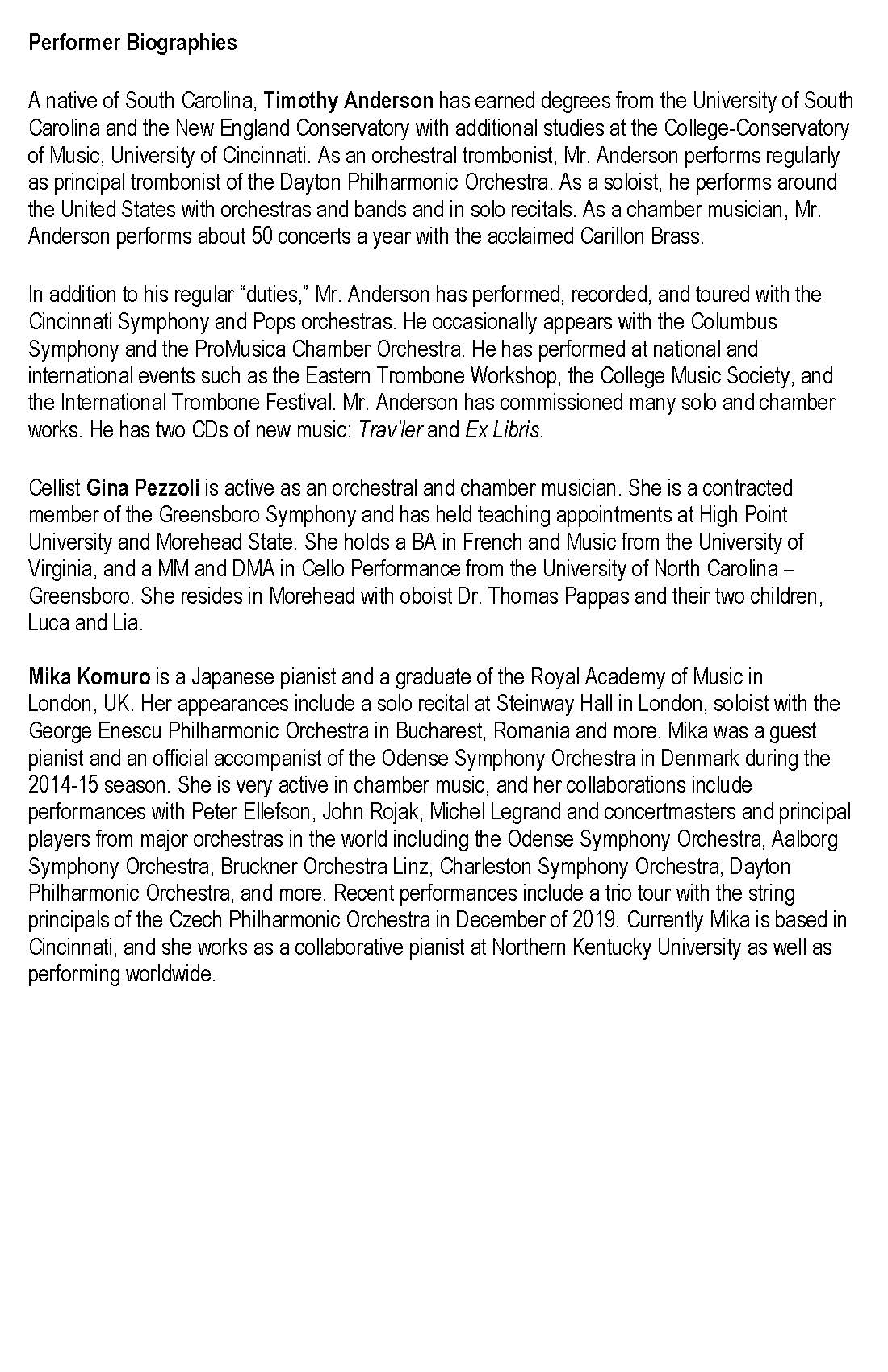